Chances Are: The Institutionalisation of Cryptocurrency 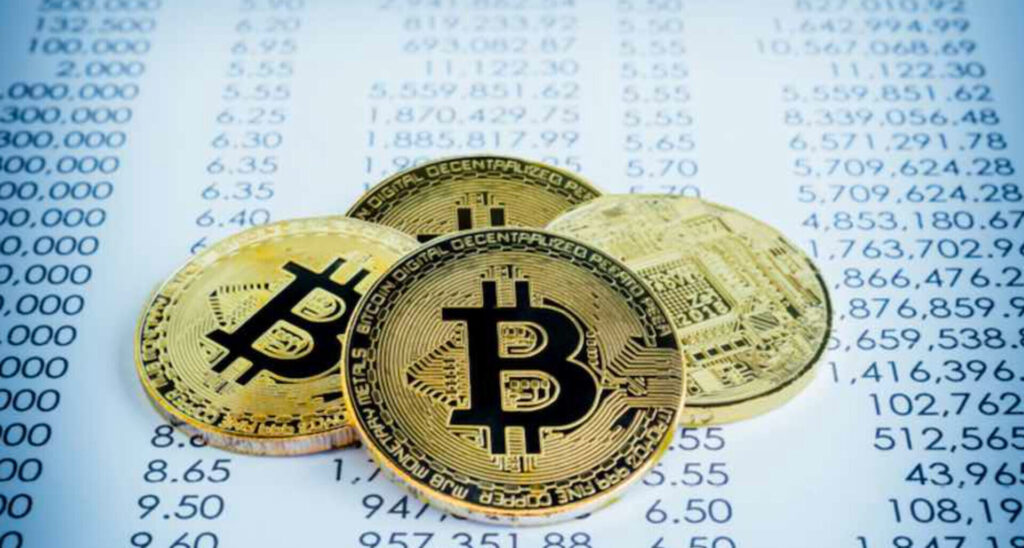 We believe that cryptocurrencies are on their way to becoming fiat currencies. Increasing numbers of institutions have entered the market. Bitcoin is now the world’s third largest currency, offering a low-cost payment method in a safe-haven asset that’s independent of central bank mismanagement. Our own research shows that there’s already 4m UK crypto-investors, that people boast about ownership and that these investors are increasingly mainstream. Bitcoin has been around too long and become too big to ignore.

Are Cryptocurrencies going to institutionalise? Will they become a commonly traded currency used for financial transactions, securities trading, or corporate accounting? This would have been a bizarre question a few years ago. But today we see Standard Chartered, Blackrock, and Fidelity entering the fray. Surely the answer is ‘yes’? In this note we lay out the three main reasons why we think that’s indeed the case.

The cryto-sceptic position is that Bitcoin has no intrinsic value – or worse since the protocol is gratuitously energy consumptive. So, they argue, Bitcoin’s end-state must be zero and any interim value is pure bubble. But this doesn’t follow. For example, what’s the ‘intrinsic value’ of an elaborately printed piece of non-compostable paper carrying a picture of George Washington? Fiat currencies, like dollars, are no longer backed by any commodity. Why can’t Bitcoin simply be an emerging fiat currency?


That’s not to say Bitcoin’s price doesn’t contain speculation, as is the case for any fiat currency. For example, the simplistic technical analysis of Figure 1 suggests Bitcoin was over-priced in 2017. But eight years of steady, albeit volatile, compound growth doesn’t feel like a bubble. Bubbles can’t defy gravity indefinitely and most are short-lived. The posterchild bubble, 1637’s Tulpenmanie, only lasted three years.

Conversely, the ‘emerging fiat currency’ view is reinforced by the sheer depth of the market. At present there’s about $400Bn of crypto-assets held in exchanges and a further $600Bn of outstanding derivative contracts, mostly futures. According to Deutsche Bank, based on total currency in circulation, Bitcoin is a nose ahead of Japanese Yen and thereby the world’s third largest currency. As a result, currency desks at institutions like Bevan Howard, a large Hedge Fund, have started trading them.

There are three groups of people who’ve been drawn into the crypto-markets. One of these groups are the traders that we’ve just discussed. Likewise, the other two groups tell us something about crypto-currencies, the role they could play in the future and what attributes underpin their valuations.

The second group is retail bankers. They believe that because it’s a near costless medium of exchange, Bitcoin has the potential to become the dominant peer-to-peer payment method in a cashless world. To this end, El Salvador has recently adopted Bitcoin as legal tender, alongside the US Dollar, and announced their intention to issue Bitcoin denominated sovereign debt. 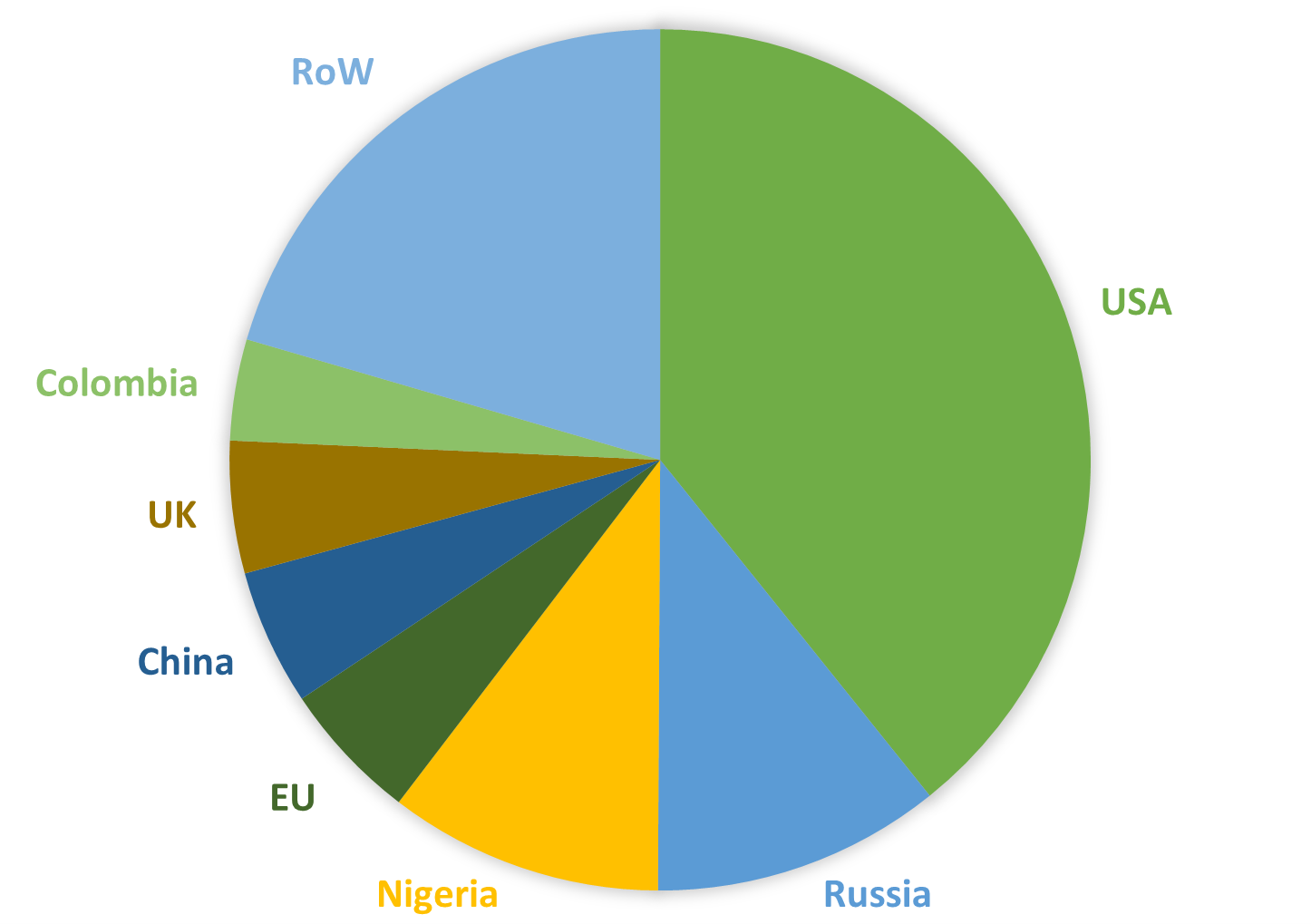 
The final group are the libertarians, who kicked things off in the first place. For them cryptocurrencies offer freedom from political meddling and central bank interference. They are the ultimate safe-haven asset, being both autonomous and anonymous. Undoubtedly that means the market facilitates money-laundering and that needs addressing. But it also means that legitimate savers can protect themselves from repressive or corrupt regimes, like Nigeria and Russia, as shown in Figure 2.

The final evidence for the ‘emerging fiat currency’ thesis is our own fieldwork on a nationally representative sample of 1329 respondents. We used an anonymisation technique called ‘unmatched count’ to estimate the true number of crypto-asset holders in the UK at 7%. Whilst that’s not a majority, it’s still 4m adults. Moreover, there are 81m Bitcoin wallets. Since this includes custodians, such as exchanges, there’s probably 200-300m end-investors globally – the same number of people who regularly play football. 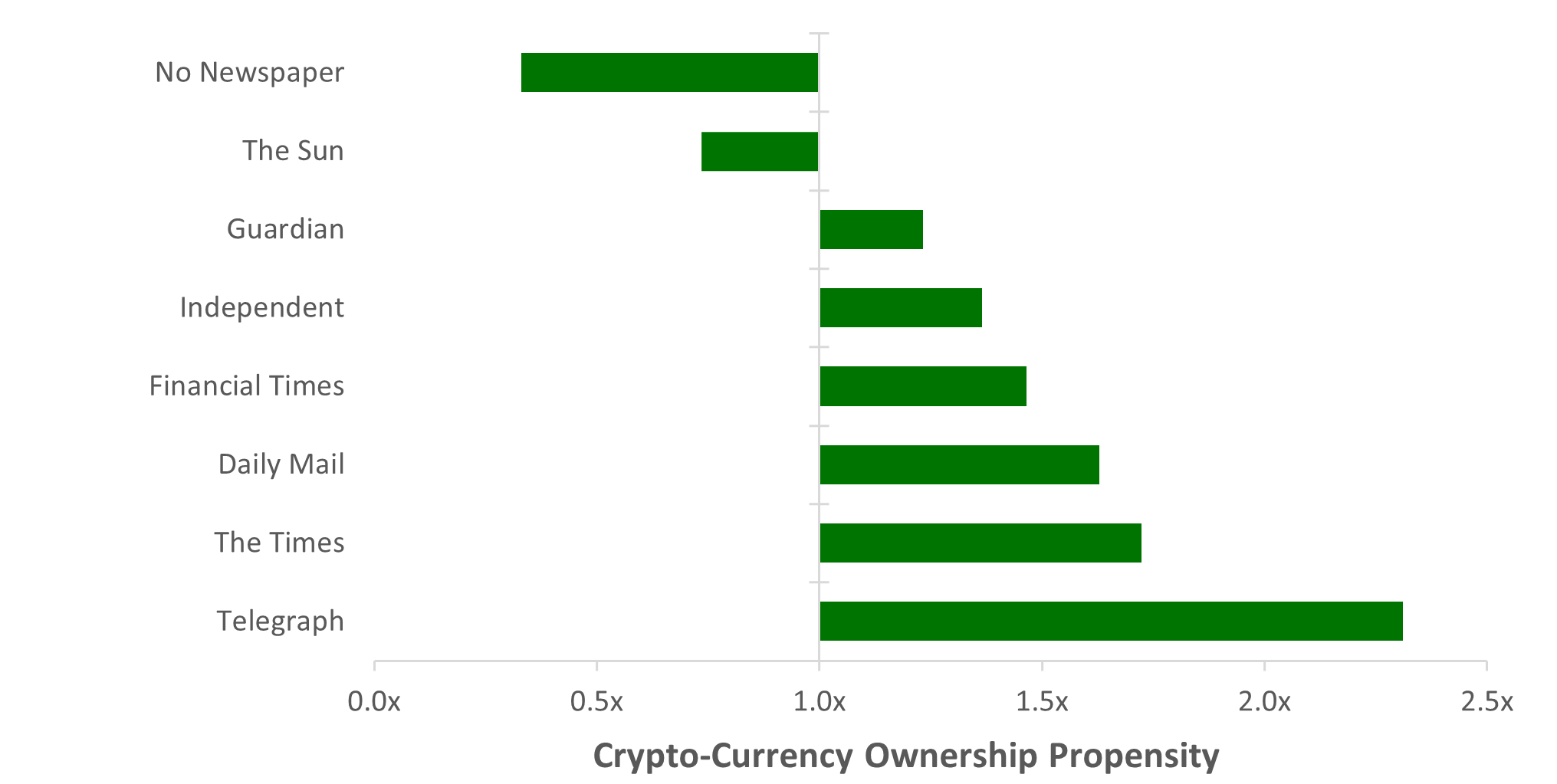 
Notably the equivalent of the 7% when you ask directly, without anonymisation, is 11%. In other words, people aspire to own crypto-assets and boast about owning them even if they don’t. You also see this in the demographics. Figure 3 shows crypto-investor newspaper preferences. If you read the Telegraph you are x2.3 more likely to own cryptocurrencies. Crypto-investors are now the mainstream bourgeoisie, not crackpot enthusiasts, suggesting the potential for wider adoption.

In this note we’ve made three arguments as to why cryptocurrencies will eventually become fiat currencies:

The main unknown is the regulatory response. Central Banks, the IMF and other policymakers are rightfully concerned with the undoubted criminal activity associated with cryptocurrencies and, perhaps more importantly, their reduced control over money supply. The most extreme regulation would be a total ban on holding crypto-assets. More realistically, it might mean increased transparency on beneficial ownership and measures to improve market resilience. And regulation along these lines would probably further propel adoption. It’s hard to see the scenario where cryptocurrencies go back in the bottle.