Why is Correlation Not Causation? Part I

We consider the dangers of commercial decisions based on uncritically observed correlations, and make a case for examining causal links to help manage decision risk.

“You would have me believe that causation can be completely circular. I went through because I came back from going through to persuade myself to go through” 1.  Causation is indeed a slippery topic, particularly if you have a time machine.

Yet causation remains a stubbornly unavoidable issue at the heart of every commercial decision.  Managers take actions, such as lowering prices, because they believe they know the consequences, like sales growth that will more than offset the margin loss. The problem is that these consequences are typically based on uncritically observed correlations.  There are two main reasons why this can be misleading.

The first is the inherent riskiness of data dredging.  As we’ve discussed in an earlier post, if you try hard enough, you’ll always find a significant relationship.  Essentially 5% of variable comparisons will correlate by chance at a 95% confidence level.  People are spectacularly good at finding spurious patterns.  There’s even a name for it – apophenia.  People can see Jesus in a piece of toast and they shamelessly post-rationalise in meetings.

With a limited number of data points and an endless supply of variables, macroeconomics is fertile territory for this sort of thing.  One delightful example is the negative relationship between penis length (e.g. South Korea 10cm, Ghana 18cm) and real economic growth between 1960 and 1985 (e.g. South Korea x3.8, Ghana x0.9)2.

The second reason correlations can be misleading is that whilst there may be a genuine relationship, the causal link is actually more complicated in practice.  For example, the graphic demonstrates a link between national chocolate consumption and Nobel Laureate production3, 4.  The Swiss eat lots of chocolate and have won many Nobel prizes, whilst the opposite is true of, say, Portugal. 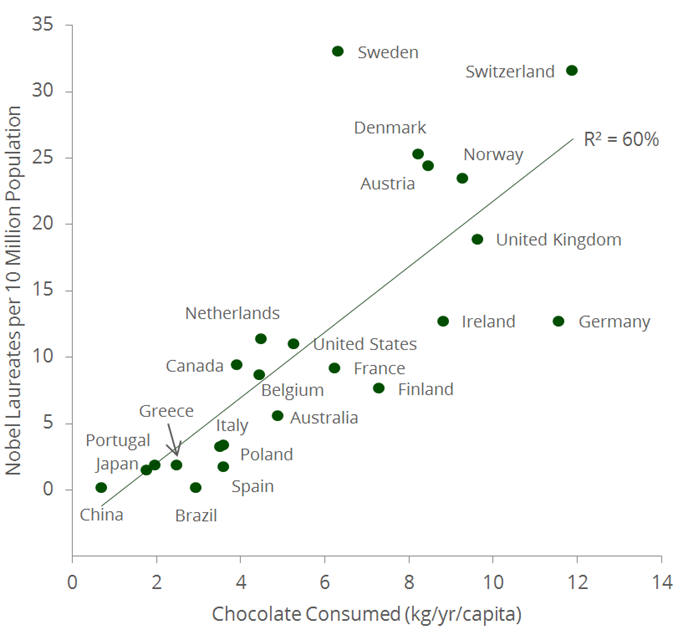 But this positive relationship is really a consequence of economic wealth.  Richer countries spend more on education and luxury goods, like chocolate.  In formal terms, A (Nobel Prizes) correlates with B (chocolate) because both A and B are caused by C (wealth).  So eating more chocolate won’t increase your chances of winning a Nobel Prize and vice versa.  The prize for discovering giant magnetoresistance goes to Professor Peter Grünberg, not Willy Wonka.

And this is just one example. In our next post we will provide other commercial examples, including where A causes B and B causes A, and discuss how managers can avoid the trap of acting on such misleading correlations.  The key message is that in most real-world cases the true relationship between two variables will either be more muted than at first appears or, potentially, non-existent.